How has the UK ban on taking children out of school to go on holiday during term-time affected your bookings? It is now over a year since the law¹ was amended in September 2013, and 9 months since the UK parliamentary debate² about peak season pricing took place back in February. We’ve had a look at bookings that include children to see what impact the legislation has had on self-catering accommodation providers since then.

Term-time bookings that include school-aged children

Having identified which months mostly do not have school holidays occurring in them (see the table featured in the blog How School Term Dates Affect UK Bookings), we looked at our statistics to see what percentage of bookings for holidays starting in September, November, May and June in 2012, 2013 and 2014 included children. The sample used included the total number of bookings made by guests from GB, for all properties that have been using SuperControl since at least January 2012. 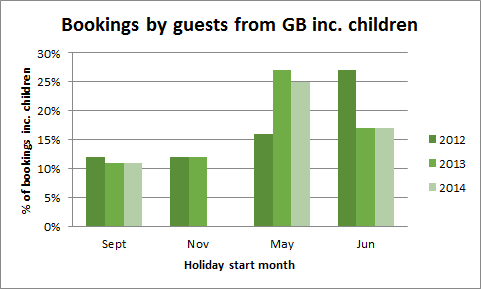 Overall, so far the percentage of bookings that include children has remained fairly constant. In September 2013, when the change in law was enforced, it did drop very slightly (just 1%) then stayed the same in September 2014; November 2013 stayed the same as the previous year (it’s too early to accurately report on November 2014); May saw a slight drop (2%) in 2014 compared to 2013; and although the percentage of bookings made by guests from GB that included children saw a big decline BEFORE the ban came into force in June 2013 (10%), it then remained unchanged in June 2014.

Term-time bookings that include school-aged and younger children

Further discussions have arisen in the media speculating that the change in law will have a bigger impact on families with both pre-school and school-aged children. Our own findings (from the same sample used above) are that bookings for this niche have been affected even less. In the immediate aftermath of the change in law, September 2013 saw a drop of just 1% in the number of bookings made through SuperControl that included children and infants; then bookings for holidays starting in the following November, May and June saw no change. Encouragingly, in this academic year September has also remained constant. 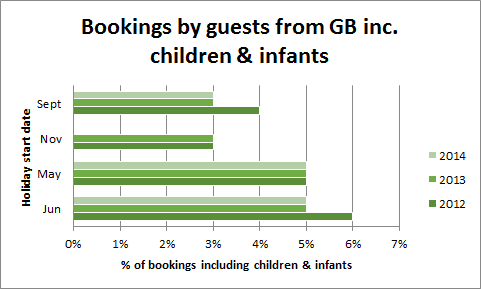 Time will tell. There is an argument that some parents are willing to risk being fined for taking their child on holiday during term-time because the amount they could be charged is often less than the increase in price they would have to pay for the same holiday during school holidays; so one offsets the other. In fact The World Travel Market 2013 Industry Report³ states that almost 4 out of 10 (37%) parents will take their children out of school to holiday despite the fines. If this proves to be true, in theory the ban will have little effect on off-season bookings.

Another argument is that there will always be (and always have been) fewer families holidaying during term-time. Not only because of the possible fines parents face for taking their children out of school but also because of other contributing factors – namely the weather, seasonal opening-times for attractions, even hours of daylight.

It is easier (and cheaper) to holiday with young children when there is a higher likelihood of long days on the beach or in the woods, or cycling across the moor; taking picnics to feast on in the great outdoors before heading back for a BBQ in the garden then collapsing into bed, exhausted after an active day. This is much more difficult when the temperatures drop, the rain sets in and the days are so much shorter.

Which leaves us with the usual dilemma, how to fill your calendar during the shoulder season. From low-occupancy discounts to added value incentives, we’ve got a whole section on the blog dedicated to Positioning for Performance to help you achieve this very thing. What works for you?