At the time of writing, the total bookings taken through SuperControl this year had just smashed the £300m barrier. Well done folks! This is already way ahead of last year’s final total (£237.7m), so we’re on course to end the year on a high. But, rather than rest on your laurels, I’m sure you’re already thinking of next year and how you can improve on this year’s success.

We thought it would be useful to take a look back at the bookings taken through SuperControl over the past three years to see if there have been any emerging trends – or drastic changes – in guest booking patterns during this time. So, what are the peak months for bookings? 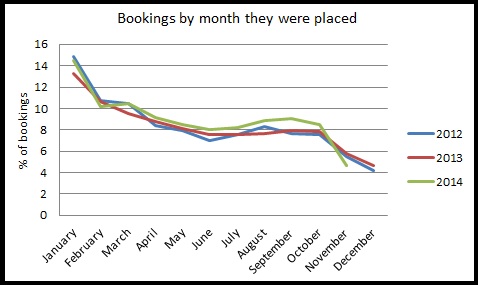 Start on a high

Although traditionally a quiet month for holidays, January is by far the busiest month for bookings. It’s hardly surprising – bloated and bored once the festive celebrations are over, and turned off by the miserable weather (here in Blighty, at least), people start dreaming and planning a getaway to cheer themselves up.

Bookings taken in January this year accounted for 14.5% of the total bookings taken for the year to date (up to and including 20 November). In fact, the first booking of 2014 was taken at just eight minutes past midnight on 1 January – what a perfect way to celebrate the new year! It was a similar story in 2012 and 2013, with more bookings placed in January than any other month (14.9% and 13.2%, respectively).

Alistair Handyside, chairman of Premier Cottages, had the following advice:

“Everything has to be spot on for the first of January. This is when the TV ads start, which triggers people to start looking at placing bookings for their own holidays. Even though the TV ads are usually for more exotic locations, it also prompts people to book closer to home. If you’re not prepared for this busy time in January, it’s difficult to catch up. Your work to fill availability becomes much harder.”

The line chart (above) plots when bookings were made between 2012 and 2014, clearly shows that bookings over the three years have followed a very similar pattern. Beginning on a high in January, they dip to around 10% in February and March, before levelling out. They then climb slightly over August, September and October, before tailing off again towards the end of the year. 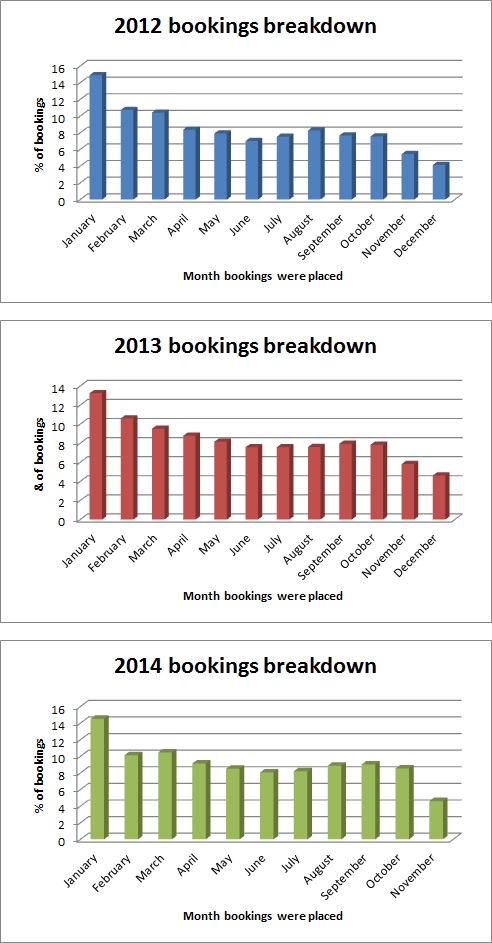 Although we don’t have the figures for this year yet, December seems to be the perennial underachiever when it comes to bookings (4.1% in 2012 and 4.6% in 2013). However, this 0.5% rise in bookings between 2012 and 2013 is positive – will 2014 see this increase further? Let’s hope so. Perhaps now could be a good time to market a December early bird special to boost these booking numbers.

If we look more closely at the data in the bar charts, it’s evident that booking numbers (excluding January) are showing signs of levelling out during the year, moving away from the more traditional peaks and troughs that we are used to seeing. This is great news, as it shows there are always potential guests out there looking for a holiday.

Almost one-third of these potential guests will be last-minute bookers. Looking at our data for the past three years, bookings with a lead time of 28 days or less make up around 30% of the total bookings for each year (30.1% in 2012, 30.6% in 2013 and 29.2% in 2014 to date). See our guest blog for tips on how to make last minute bookings work for you. It’s also worth a mention that people who take short breaks often take 2-3 breaks in the year.

Guests are creatures of habit – they book in droves in January, but they are starting to steadily book more and more throughout the year too. Even December bookings are rising. And, the total number of online bookings has dramatically increased – that can only be good news for business.

(Look out for our more in-depth blog on 2014 booking trends in December.)