It’s June, so your attention is likely to be directed towards the peak summer season. We thought it might be useful to have a look back at our statistics for summer bookings (any bookings with a start date between 1 July and 31 August) over the past couple of years to see if there are any interesting trends to watch out for.

For the purposes of comparison, we have only included bookings for properties that have been with SuperControl in 2013, 2014 and 2015, and bookings placed up to and including 13 May each year. 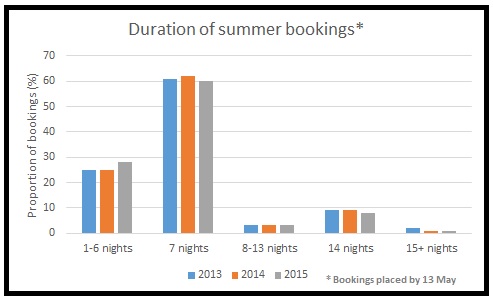 How can you turn this to your advantage in 2015?

The trend of booking accommodation at the last minute is well established, as is guests’ propensity for booking short breaks. Neither of these trends are likely to change any time soon. Naturally, you want guests to book a 7 or 14 night stay but if your summer dates are not working out so smoothly it pays to alter to a fully flexible approach to late bookings and optimise your last-minute availability.

In your Price planner in your SuperControl account, you are able to load your prices for shorter stays, so you can ensure that every booking (and any length of stay) is profitable.

Being fully flexible will boost your ranking and give you more visibility on the likes of Booking.com too, which will hopefully equate to even more bookings.

Staying with the last-minute theme, if we look at the summer bookings placed in 2013 and 2014, the highest proportion of bookings placed each year were in June and July. So, if 2015 is going to see the same trend, we hope you’re about to get very busy with new bookings and enquiries. 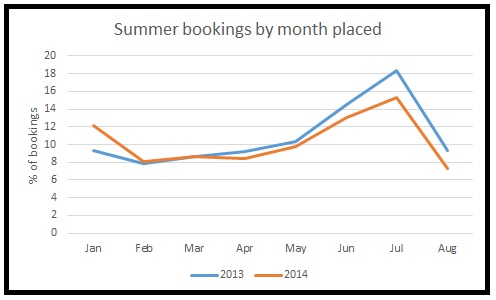 This is in slight contrast to VisitEngland’s latest Staycation Monitor report, which found that there had been a small shift towards longer trips abroad, at the expense of long trips in England only (the England short break market remains the same).

Of the remaining UK and Ireland bookings, more stays were booked by guests from Germany than anywhere else. The next most bookings came from the US, and then the Netherlands. This pattern has been repeated in 2013, 2014 and 2015.